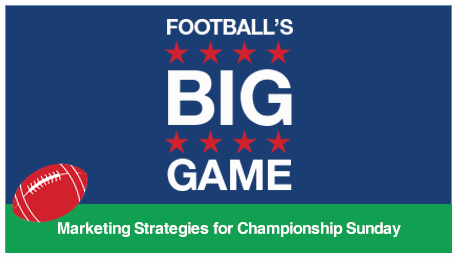 With more than a 100 million viewers each year, CHAMPIONSHIP SUNDAY is one of the largest sporting events of the year, and the biggest stage to tell a brand story.

With so many eager sports fans tuning in to the telecast, it’s no surprise that TV spots during the game are some of the most expensive of the year, and they’ve been well worth the hefty price tag in the pre-digital era. Now, with the multitude of viewing options, brands are having to reconsider their traditional marketing plays.

Despite generally declining NFL ratings and viewership, Championship Sunday still represents one of the few events during which people actively engage with branded content. The medium of interaction is becoming increasingly digital and social, as second-screen devices like smartphones and tablets have become greater companions (and even replacements) to TV. Marketers will need to effectively navigate this brave new world armed with more than traditional TV ads. In order to tap into the Big Game’s evolving consumer engagement opportunity, we’ve put together an overview of some key trends that will play out in 2018.

TREND#1: Social is the name of the game – and brands are planning their strategies well in advance of kickoff

Brands can spend upwards of 25% of the cost of a Championship Sunday campaign towards generating buzz before and after the game, and most of that activity happens on social media.

Marketers develop sophisticated strategies that come into play well before the actual broadcast, often releasing teasers for TV spots, unleashing brand ambassadors and tapping social influencers to spread and amplify their message. For brands that don’t pay for a television slot, social media can level the playing field by providing an incredible opportunity to join existing Championship Sunday conversations on Twitter and Facebook by, say, posting funny messages or images related to what’s happening on screen. Even small brands see success from aligning their marketing efforts with the Big Game by offering timely deals and creatively piggybacking on football-themed social sweepstakes, hashtags, tweets and snaps.The bottom line? Social media is a vital component of a game-day marketing play, and brands that don’t have a strategy to engage viewers before, during, and after the game, risk being sidelined.

Bud Light’s 2018 campaign incorporates current social media darling Snapchat into its pre-Championship Sunday creative efforts via the release of 28 custom beer cans, specific to NFL teams. Customers can take photos of the cans on shelves well before Game Day with unique, branded Snapchat filters in order to enter a sweepstake to win to win tickets to this years big game.

During 2015’s event, car brand Volvo created a memorable, ‘guerrilla’ social media play, now known as the “Volvo Interception”. Instead of buying a traditional TV ad during the event, they creatively leveraged Twitter by offering a free car to viewers who tweeted #volvocontest during a competitor’s commercial. It was a fun, audacious stunt that got more impressions and earned more attention than any other car maker.

Think Championship Sunday parties and you normally think of beer, pizzas, nachos and every kind of delicious, salty snack that supermarkets have to offer. But with the growing taste for football among women in particular – who now make up 46% of the overall viewing demographic – and Millennials overall, there’s been a slow but sure change in the dominance of certain food and drink staples during the big game.

Brands are touting their nutritional, wellness and heritage products more and more, and highlighting their brand values in pursuit of this key demographic, for whom healthy lifestyles, conscious consumption and social responsibility are paramount. But marketers are finding that in connecting with this particularly diverse viewership, the key ingredient is authenticity. An authentic brand story, told in an entertaining and educational way, with a heavy social media component has shown to launch a brand into the stratosphere during the Big Game… and long after.

Avocados from Mexico’s 2017 Big Game campaign educated consumers about the wellness benefits of avocados with a fun “Secret Society” commercial featuring a society that was terrible at keeping its biggest secret – that Avocados from Mexico have good fats. Rounding out the TV spot, which became one of the Top 10 Most Shared Big Game Ads for the year was a social juggernaut under the hashtag #AvoSecrets that covered recipes, nutritional factoids and videos on how the brand grows avocados via all major social channels, generating authentic word-of-mouth interaction and over two billion impressions.

With the rise of connected devices, consumption of football is changing. Since this change is led by Gen Z’ers and Millennials, who use apps to stream much of their content and multitask constantly by using other devices – smartphones in overwhelming majorities – to text, browse the web, use social media, read email, or shop online while watching games, Big Game marketers are realizing that their expensive TV spots may be missed completely by their most coveted audiences! Enter ‘360-degree’ omni-channel strategies, the new ‘must-haves’ in the battle for Millennial and Gen Z eyeballs. The premise? To reach and engage these distracted viewers across all the channels and platforms they use, by leveraging data on their second-screening activities. Luckily for marketers, there’s lots of this kind of data now available.

For example, research shows that apps for food delivery, gaming, transportation, and social messaging see significant upticks on Championship Sunday – reflecting how game-watchers order food before and during the game, how they use social media, email and messaging to discuss key moments on screen, and how they browse the internet in direct response to commercials that air during the broadcast.

Marketers can prepare to catch their attention with comprehensive digital plans that involve paid and organic search ads, in-app content, engaging social media posts, website landing pages and optimized-for-mobile video ads before and during the game. This not only drives engagement, but also creates a campaign that will more likely stay in the minds of its intended audience.

T-Mobile was deemed a winner in 2017 Big Game advertisers’ digital marketing efforts, taking advantage of display ads, social ads and paid search, with in-stream and discovery ads appearing on YouTube – in addition to being the only brand to leverage user-generated content leading up to the Game (encouraged by brand ambassador Justin Bieber) to market its unlimited data plan. These efforts helped T-Mobile become the second-most mentioned advertiser on Twitter.

TOUCHDOWN STRATEGIES FOR 2018 – WHAT TO CONSIDER

Research shows that Millennials are most likely to visit an advertiser’s site during the game in an effort to learn more about the brand or replay ads, which means an important part of Big Game marketing should involve dedicated landing pages for this browsing activity. Not creating mobile and search-optimized landing pages represents an incredible missed opportunity for brands to capitalize on the small window of interest created by the Championship Sunday.

By producing social content in real time, brands can become part of social media conversations in very significant ways. Having fun posts ready for key moments of increased social media activity (like halftime, touchdowns, and timeouts) can be helpful – but being agile enough to respond to unanticipated situations can truly take a brand to the next level of social media domination.

Oreo’s timely tweet during the 2013 Championship Game power outage “you can dunk in the dark” was one of the most memorable events of the game, racking up over 16,000 retweets, because it was surprising, funny, and relevant to what was happening in that moment.

Since game day party planners usually refer to social media sites like Pinterest, Facebook and Instagram, food and beverage brands can ideally insert themselves into the process by putting up ideas and recipes for snacks, with links to deals and discounts before shoppers hit the supermarkets. With 64% of party planners shopping in-store instead of online, the weeks leading up to the Championship Sunday are golden opportunities for creative POS campaigns as well.

Heineken’s 2017 “What’s Your Play?” campaign included football-themed POS materials, in-store and digital partnerships, and a Twitter-driven sweepstakes that invited viewers to share their best plays for life’s daily challenges, for a chance to win prizes and rebate coupons. A microsite was also created to give consumers recipe tips and deals on party essentials like chips, dips and deli platters. The campaign delivered a 33% lift across the Heineken portfolio.

For small brands that can’t afford TV spots or famous brand ambassadors, influencers can be hugely effective in driving engagement with targeted audiences. Locally known, brand-compatible influencers can provide more authentic messaging than impersonal marketing tactics, and marketers can tap into their followers to promote their Championship Sunday offers and services.

Snipp provided beer brand Presidente with a seamless way of incentivizing DJ’s, one of its key influencer segments, to promote their product. DJ’s can register themselves on a custom website, and if accepted into the influencer program, can earn cash rewards by promoting Presidente on their own social media accounts using branded hashtags. Snipp validates their posts and pays their rewards via SnippPay.

In the omni-channel, second-screening universe, one in three viewers will be checking their email throughout the Championship Sunday. Marketers should keep this in mind and make personalized email a key feature of their campaigns leading up to and after the game, as email is still one of the most effective mobile marketing channels with a high ROI. TV spots, for example, can be re-packaged for email to create top-of-mind recall after the game, and boost engagement.

Airbnb used email marketing to drive home its message of acceptance long after the 30 second commercial, “We Accept,” aired during the Big Game. The brand sent out emails that incorporated clips from the commercial, along with a call to action button to encourage users to “Learn more.”

Commercials on Championship Sunday will live and die as videos, and the best ones will be shared quickly on social media – earning precious earned impressions.

As digital video consumption overall is expected to grow 9% from 2017 levels, it’s more important than ever for brands to amplify the reach of their campaigns with a strong, shareable, digital video presence across platforms.

Loyalty programs can leverage the Championship weekend to effectively generate enthusiasm among members by offering points for football themed perks.

Marriott International is using its rewards program to give members access to the 2018 NFL season via loyalty points that can be redeemed for exclusive football-related prizes such as lunch with players, tours of NFL studios, behind-the-scenes information throughout the regular season, and even Championship Sunday tickets.

Enthusiastically attended events are great for experiential marketing, and events don’t get more enthusiastic than the Big Game. For brands that can’t get into the actual venue, viewing parties at sports bars and other public spots can be ideal to showcase products or services, because this kind of hands-on marketing really works – 98% of consumers say they are more inclined to purchase a brand after an experience, and 65% of brands say it correlates positively with their sales. More importantly, nearly half of all consumers who participate in an experiential marketing play will share their experiences on social media.

General Electric created multiple experiential tents outside of the 2017 Big Game during the pre-game. The first tent offered tasty barbeque to hungry fans in order to showcase their new smoker pits. The second tent allowed fans to test GE’s new thermal imaging cameras, where families could take pictures and immediately have them printed free of charge, leaving fans with a picture to remember the event and a motivation to share via the tag #FuelTheFuture.

The Ultimate Snapshot Of Sweepstakes & Contests

Who Participates in Sweeps and Contests?

END_OF_DOCUMENT_TOKEN_TO_BE_REPLACED

Qrackd: The Lost Soles At Brooks

The other day I realized I needed new running shoes and so went down to my trusty neighborhood...

END_OF_DOCUMENT_TOKEN_TO_BE_REPLACED

Snipp’s Guide to an Effective and Engaging Digital Sweepstakes Campaign

An estimated 55 million[1] Americans enter sweepstakes and contests each year, making them an...