Power Up your Promotions – The Amplification Toolbox 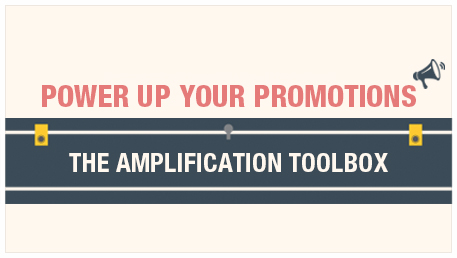 The marketing world has seen a sea change in tactics and technologies, and campaigns often strive to incorporate these innovations in order to ‘wow’ a digitally blasé consumer base. But although innovative tactics can be eye-catching within a crowded promotional landscape, a multi-pronged media approach that balances innovative digital with traditional marketing channels, within the key levers of paid, owned, and earned media is what can truly amplify the effects of any one tactic — and serve as the ‘tool box’ for a promotion. In order to help our brand and agency clients understand all the tools in the amplification tool box, we’ve put together this guide to Powering Up Promotions.

DEDICATED LANDING PAGES ON OWNED WEBSITES
Give your promotions a one-stop landing page on your websites, with easy to follow ‘how to participate’ details – if the promotion involves selling tickets, or signing up for a sweepstake, make sure there are direct, highlighted links to booking widgets or entry forms. Sounds simple right? Still, we’re often surprised to see brands miss this basic step, making their promotions hard to find on their owned sites.

BLOGS THAT TIE-IN WITH PROMOTIONS
Blogging is one of the most effective inbound marketing techniques around, as it helps establish leadership in an industry, and also boosts search engine rankings by adding fresh content to owned media. Don’t miss this step in a promotion – create content that ties in with your promotions, and circulate your blogs via social media and on your websites.

SOCIAL MEDIA CHANNELS
You NEED to leverage social media to amplify pretty much anything these days. These are some examples of how brands can make a splash on social:

Join in on popular social media traditions that already have a loyal audience: Volkswagen, for example, effectively uses #tbt (“Throwback Thursday”) to visually showcase the evolution of their automobiles, inducing nostalgia and conversation around their brand.

Create a fun social experience: Oscar Mayer created an entertaining social media journey to drive bacon sales – testing the theory that Oscar Mayer bacon was ‘as good as currency’, they sent a man cross-country with no cash or credit cards – just a refrigerated truck of its branded bacon. All barters were arranged via social media and videos of the barters were distributed online. After 41K barters, the barterer made it across the country, and earned more 300+MM impressions for his experience, and gave Oscar Mayer a ton of promotional buzz.

Use contests to build a social buzz: Sweepstakes and photo contests can be great, as anyone with a social media account and a few spare seconds can enter them, and they also give brands access to great user-generated content that can be reused. Kellogg’s partnered with Snipp to leverage social media to connect with teens and millennials and create user generated content for Pringles. The brand put out a call to users to submit a video of themselves playing drums on Pringles cans – hashtag entries via Twitter and Instagram were moderated by Snipp, and select submissions were entered for a chance to win money for their high school bands or gift cards to participating stores.

EMAIL SUBSCRIBER LISTS
One of the oldest, but most effective marketing plays can’t be ignored. Research shows that unique click-to-open rates remain steady for email marketing at 20%, proving that the platform is still effective – when used effectively.

Have a clear call to action

Make it personalized: WeddingWire, an online marketplace for all things wedding planning related, makes good use of personalized emails. By using witty, personalized subject lines, the brand inspires recipients to click on the email, check out their offerings, and forward the email onwards to boost word-of-mouth influence.

Make it fun with gamification: An event at Primm Valley Resort and Casino was marketed via an email blast, inviting recipients to play for their chance to win free tickets. Using a fun, clickable game within the email itself, players could win grand prizes of two tickets and a hotel stay. Overall, there was a 400% increase in the rate of ticket sales with these gamified emails compared to prior efforts.

CREATIVE PACKAGING
All our devices get switched off at some point but packaging lives on in our shelves and cabinets. Described as marketing’s “dark horse”, technological developments like 3D printing, AR and NFC have dramatically increased the potential for packaging to serve as a marketing media platform, enabling brands to personalize and update promotional content on them.

Augmented Reality: For a 2016 Halloween promotion, Dr Pepper used mini cans of soda, cartoon monsters (MiniMonsters), and an augmented reality app. When consumers scanned two cans side by side, they unlocked a battle between the MiniMonsters. Because the app allowed for 15 different interactions in all, consumers were encouraged to buy multiple cans and flavors – and since the app included a sharing functionality, more than 10,000 of the app users shared their MiniMonster battles on social media.

In a bid to set itself apart from the competition, The New York Times launched a VR app to immerse users in its storytelling. To get users to download the app, it shipped more than a million Google cardboard headsets to its print and online subscribers – who were effusive with praise and astonishment at the experience, making for unbeatable promotional lift.

FREE-STANDING INSERTS & COUPONS (DIGITAL AND PAPER)
Retailers’ circulars, which include coupons, still reach an estimated 50 million households per week. For amplification, retailers should keep in mind that coupons are still hugely popular amongst all demographics – and the only shifts have been in the channels chosen. While paper coupon usage only dropped slightly or held steady with older Americans, younger people are using online coupons or coupon codes more often.

FLYERS AND POSTERS:
In an online age, there’s something to be said for going au naturel and exercising a little guerilla marketing. Put up flyers in local cafes and posters on corners.

BILLBOARDS AND OOH
The potential for traditional billboards and OOH (out-of-home advertising), although effective in themselves, going digital (DOOH), is exciting for amplification purposes. It means brands can be very responsive to on-the-ground marketing needs, enabling them to localize advertising, yet leverage the reach and scale of this particular channel.

Diageo launched a series of digital billboards using real-time weather-activated triggers to deliver Pimm’s ads when temperatures reached or surpassed 16 degrees. In addition, by adding in a beacon network, the boards counted the number of smartphones at local venues to tell potential customers where there were free seats to enjoy a jug of Pimm’s.

TV ADS & ONLINE VIDEO
TV is still the best for generating the broadest top-of-the-funnel engagement. Adding television to the media mix amplifies effectiveness by 40%. Microsoft found that in the 30 days after it launched a TV campaign, social media conversation around Microsoft lifted by 41% amongst people who tweeted during shows when the ad aired.

SOCIAL MEDIA ADS
There’s massive competition for eyeballs on social media. In the face of this uncertainty, many brands are making much more cost-effective use of ‘paid’ media rather than relying on organic message distribution.

The National Mango Board (NMB) hosts an annual Mango Mania Display Contest during summer, designed to help stores pump up mango sales while educating shoppers about mangos. Retailers build eye catching POS displays, with nutrition information, mango recipes and samples, the most creative of which compete for prizes and incentives. Volume for participating stores more than doubles during the contest, driving incremental sales.

SOCIAL INFLUENCERS
Brands are increasingly leaning on social influencers to amplify their campaigns, and with good reason. Their endorsements can be very effective

To help Presidente reach DJ’s, a key influencer segment, and incentivize them to promote their product, Snipp created a custom program targeting DJ’s, where they can register on the brand’s website, and if accepted into the program, they can earn cash rewards by promoting Presidente on their own social media accounts. Snipp validates the hashtags #SoyPresidente & #Rewards and pays the participants via SnippPay.

50% of consumers want brands to tell them what content to create, but only a measly 16% actually do that.

One of the best examples of a super-charged promotion incorporating user-generated content is the “Shot on iPhone” campaign. Apple showcases customer photographs to directly prove that the iPhone’s camera shoots breathtaking, print-ready photos. Since all the images from the campaign are created by their users, it amplifies the overall promotional reach through social sharing.

‘VIRAL’ AND ‘SHAREABLE’ CONTENT
Earned media starts with great content packaged in a way to encourage sharing. Content that is designed to generate an emotional response from the audience (i.e. laughter or enjoyment) will have the greatest impact.

PetSmart generated buzz via a branded hashtag and Halloween photo contest. For a chance to win a $1,000 prize, shoppers shared a snapshot of their costumed pet and tagged it with #MonsterCute. The campaign received nearly 10,000 submissions, while building awareness about what consumers could find in the stores. It also motivated pet lovers to stop by and purchase those same costumes.

SOCIAL RE-AMPLIFICATION
Continue to amplify social media shares generated through other amplification efforts – set up alerts to monitor placements and social mentions, and then leverage these to magnify their impact. Whenever the promotion is shared or discussed online, reply to the person sharing and retweet it, thereby amplifying “chatter”.

REWARDS FOR SHARING
If users are offered rewards for sharing promotional content via social media, they’ll be much more likely to do so.

Flock to Unlock: An increasingly popular incentive for sharing content on social media is this Twitter tool, which can ‘unlock’ rewards that increase in number and value based on the number of shares.

NASCAR created a Twitter rewards campaign at the Daytona 500 stock car race, inviting fans to “race” for real driver gear – flags, helmets, bent metal from crashes – in real time, by tweeting specific hashtags at different moments during the live race. The campaign brought in 13,000 mentions in one minute – a record for the largest social media spike in history, according to Twitter. From the campaign, the brand saw a 22.5% increase in followers watching live and 640% increase in Twitter followers.

It’s a well-known fact that retaining existing customers is much cheaper than acquiring new ones....

END_OF_DOCUMENT_TOKEN_TO_BE_REPLACED

Part 2: How Effective is Discounting your Product?

Many people in the CPG industry are coming to the realization that the consumer product landscape...

END_OF_DOCUMENT_TOKEN_TO_BE_REPLACED

Get the latest news