2013 In Hindsight: A Look Back at My Predictions For The Year 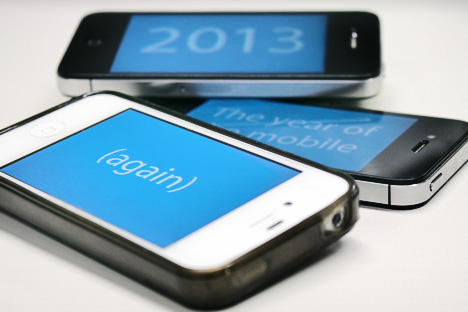 At the beginning of this year, I wrote a column on the Top 10 mobile trends for brands and marketers for 2013. I know, I know…the massive post-holidays hangover must have clearly clouded my judgment. However, if you happen to find yourself in the prediction business (even accidentally), it’s always a good idea to hold yourself to account and see just how right (or wrong) you actually were.

So, in what can only be described as an exercise of stubborn masochism, below is a retrospective on my 2013 predictions:

It’s a truism, but I think I’ll still give myself full marks for it. 2013 really was the year of mobile – again. In the United States, average mobile data usage doubled between in 2013. Smartphone usage continued to climb rapidly with penetration well over 60% (eMarketer 74%; Nielsen 64%; Pew 61%). Both Android and Apple had over 50 billion apps each downloaded from their respective marketplaces.

2. Marketing budgets for mobile will become mainstream
Predictometer: A

According to eMarketer, mobile ad spending was up 80% in 2013, to a total of $16 billion. An IAB study showed that mobile advertising spend for large businesses increased 142% in the past two years, with 32% of businesses surveyed maintaining annual mobile budgets of $300,000 or more. An increasing number of companies are creating dedicated mobile budgets and allocating increasing amounts of money to those budgets.

3. Shopper marketing will be the mobile area of focus
Predictometer: C

When I think of mobile shopper marketing in 2013, I am reminded of a line from Macbeth: it was “full of sound and fury, signifying nothing.” (Some literate reader is bound to point out that in Shakespeare’s play, the phrase above is preceded by the words “It is a tale, told by an idiot…” but I chose to ignore that part for obvious reasons).

There was a lot of effort, quite a bit of innovation, some progress but no coherent, mass-adopted solutions yet. Which is a shame. According to Google, 84% of smartphone owners use their devices to help shop while in store – and that’s just one part of the puzzle. In actuality, mobile can be used effectively across all parts of the customer lifecycle, from discovery and consideration to decision and retention. It a huge, honking opportunity but it just wasn’t to be in 2013.

According to eMarketer, mobile commerce is expected to grow 68% in 2013 and account for 16% of all ecommerce sales. Business Insider calculated that mobile commerce accounted for nearly $940 million in sales over Thanksgiving weekend. Consumers are clearly putting money where their mouth is when it comes to mobile commerce.

Mobile payments didn’t really take off in 2013 either (just as I had predicted!). Apple didn’t bother to put an NFC chip in its newest iPhone release (again!); Google Wallet seemed to lose steam, staff and a whole boatload of money; and Isis, the long-awaited-and-much-drawn-out payments app developed by AT&T, Verizon and T-Mobile finally launched in November – to terrible reviews. Mobile payments in 2013? Nope.

5. The Apple/Android phone duopoly will persist
Predictometer: A

If anything, I should have been more specific and called it the “Apple/Samsung” duopoly. Collectively the two companies accounted for 65% of smartphones in the US and 45% worldwide. If you look at Apple and Android together, they account for nearly 94% of all smartphones worldwide (up from 87% last year). Blackberry is on its last gasp and Nokia is officially no more, leaving Microsoft’s Windows Phone OS in a distant, distant third place.

When I made this prediction I thought the answers were obvious, but now I know they’re obviously not. In April, LinkedIn revealed that they, like Facebook last year, had switched from HTML5 to native code for the latest build of their app. An increasing number of developers are pointing to the lack of sufficient development and debugging tools, an as-yet immature ecosystem and performance considerations as issues in developing HTML5 applications. Increasingly, engineers are side-stepping the debate and deploying HTML5 or native code on a case-by-case basis – as well as increasingly developing hybrid applications that utilize both.

On the business side, the “app goldrush” does seem to have died down (finally). Brands and companies are no longer just demanding apps and are realizing that successful apps require significant time and resources, both in development and marketing.

This year, Google announced that non-mobile friendly pages will be penalized in PageRank and followed that up by placing AdWords campaign ads across both mobile and desktop by default. As a result, its rare to find a commercial business that doesn’t already have a mobile friendly website already (the massive and completely bizarre exception of course being Apple).

Although more accepted, the notion of designing for context however is still not widespread. Designing for context requires a rethink of the user experience as opposed to a straightforward port of the interface from one device to another (as one does when making a design responsive). Expect more next year though.

There was a fair amount of innovation around monetizing mobile this year. Facebook and Twitter both blazed the way by generating gobs of money from their new mobile ad formats. In-app monetization also gained a lot of attention with the success of Candy Crush and others like it. Affiliate networks, in-game advertising, sponsorships, branded takeovers and special versions and a host of other advertising strategies were also experimented with. Despite all the experimentation and the successes though, it’s clear that these are early days and there’s still a long, long way to go.

I was right that MS Tags would disappear: in August, Microsoft announced that it would officially shut down its Microsoft Tag service in 2015. But I was wrong about QR codes. While they’re definitely going to survive, I don’t think they’re going to thrive like I thought they might. Anecdotal evidence suggests that businesses and advertisers are increasingly moving away from using QR codes and consumers are less and less likely to scan them.

10. More augmented reality and other mobile activation alternatives
Predictometer: B

Augmented Reality got a huge boost when IKEA incorporated the technology into its 2014 catalog released this past summer. The launch of Google Glasses also brought attention onto augmented reality. Although 2013 saw augmented reality come into the mainstream, we’re still only just scratching the surface of what’s possible.

What did I miss?

No review of predictions review is possible without considering the absolute misses as well. One of the biggest in my view was about the increasing convergence between social and mobile. Today, social is mobile – and that has enormous ramifications for marketers. I should probably have also said something about the ongoing device screen-size proliferation and the rise of phablets and their impact on the space.

As Neils Bohr once said, “Prediction is very difficult, especially if it’s about the future.” And it’s a good thing too, because if it were easy, it would be no fun at all!

What’s In Your Basket: What Are Your Shoppers Buying, Anyway?

Our “What’s In Your Basket?” series is designed to show knowledge-hungry brands the possibilities...

END_OF_DOCUMENT_TOKEN_TO_BE_REPLACED

We tip our hat at truly unique and innovative mobile marketing campaigns from around the world.

END_OF_DOCUMENT_TOKEN_TO_BE_REPLACED

We tip our hat at truly unique and innovative mobile marketing campaigns from around the world.